Hyper-V is a type-1 hypervisor virtualization platform from Microsoft. When you install Hyper-V on the server, the hypervisor is installed right above the hardware and below the operating system. There are two ways to install Hyper-V: one is to install it using Server Manager on a Windows Server as a server role, and the other way is using a separate product called Microsoft Hyper-V Server that runs over a bare metal environment. When you create a virtual machine using Hyper-V you have various options to choose virtual disk type.

After you install Hyper-V server role, Hyper-V Manager is used to creating, modify and manage virtual machines. When creating VM in Hyper-V manager, we will be prompted to choose the type of virtual hard disk (VHD) that you want to use. It is important to understand the types of VHD so you can plan the host resource usage as efficiently as possible. 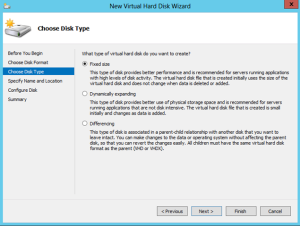 There are three types of Hyper-V VHD and each has their own pros and cons. Below is the explanation:

A fixed VHD volume is simply taking up the size of the host disk space based on the size you decide. For example, if you create a 127 GB fixed VHD, then it means 127 GB disk space of the host storage will be dedicated for this VHD only.

Dynamic volume uses the concept of thin provisioning. When creating a dynamic VHD volume, you still must specify the size, but the host disk space usage is based on the how much data is being stored on that VHD volume. For example, if you created 127 GB VHD but the virtual machine only used 40 GB on, then it means the disk space consumed on the host’s physical storage will also be 40 GB and will not consume full 127GB storage.

A differencing disk is a dynamic disk that is chained to a parent disk. This is called child disk. A child disk stores the changed/modified data of the parent disk, so basically, we will have several identical virtual machines but in a different state. Using a child disk on a VM will help keeping the consistency of the base image, but adding more complexity when relocating parent disk as all the child disks must revalidate the chain.

You can backup Hyper-V virtual machine at the guest level or host level. Backing up on guest level captures the content of the VHD but it ignores the external VM components such as checkpoint and hardware allocation, and it can only be restored to another VM.

On the other hand, backup at the host level has two methods: one is using Saved State method where VM is put into a “saved state” prior making a backup and then restored back after it done; the other one is to backup the child VM so there is no service interruption during the backup process. Iperius Backup software is built to backup Hyper-V virtual machines and virtual disks so that you can easily restore the fully functional virtual machine from backup.