iPerf is a software for the active measurement of the bandwidth available for IP networks. With the generic name of iPerf we refer specifically to iPerf3, released as open source and freely downloadable from its official Github page: https://github.com/esnet/iperf.

iPerf, thanks to the support for all the most widespread operating systems (including mobile ones such as Android and iOS) and the possibility of adjusting numerous parameters in network performance analysis for various protocols, is certainly one of the reference tools for diagnostics of network.

Among the programs to monitor the network bandwidth, iPerf3 is certainly one of the most used also by systems administrators and network administrators, thanks to the possibility of producing standard results and easily verifying the presence of any network or connectivity problems for Windows servers or Linux.

We see below some examples that show us how to install iPerf3 on both Windows and Linux, and perform a band measurement using a simple test:

The operating system of our test is the 64-bit Fedora distribution.

We can install iPerf by typing: 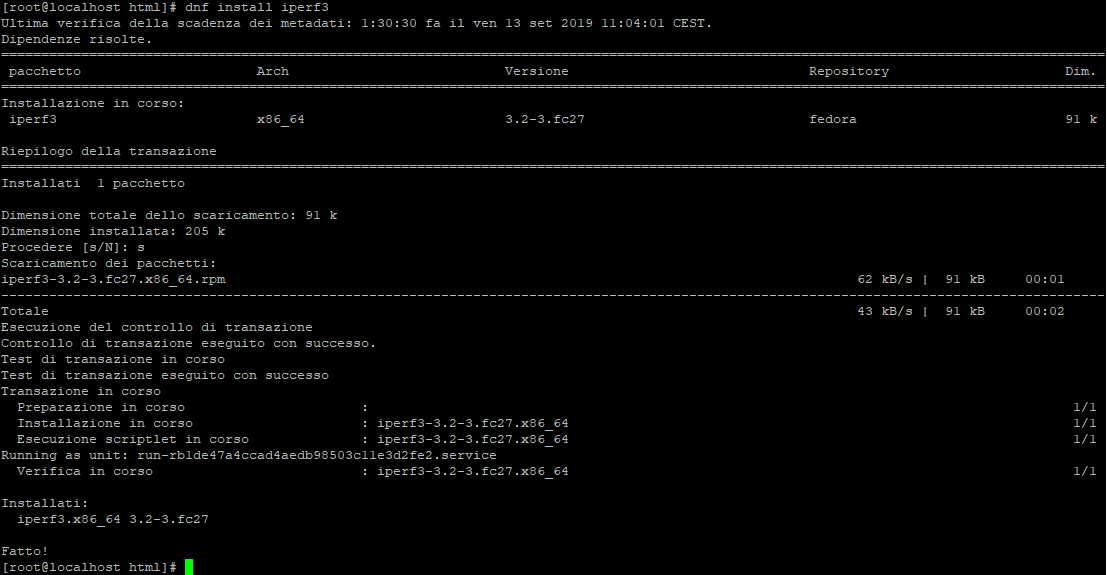 In Windows operating systems it is possible to download the executable from the official iPerf website. The program is contained in a zip package and is a very simple command line utility (it is therefore a portable software that does not require installation):

iPerf must be installed on both terminals between which we must analyze band performance. We choose a terminal as a server and execute the following command (identical in Windows and in Linux):

in this way iperf will listen as a service on the default port, the 5201:

to start the actual analysis, in the client from which we want to make calls, we must execute, for example, the command:

the result of our first test could be the following:

In the client from which we made the calls, the output shows on three columns the sequential tests (in seconds) with the respective MBytes transferred and the Bitrate (transfer frequency). On the bottom we find the total of the values, in MBytes, transferred and the average of the transfer speed, or the most interesting data in the test. The “-f K” option indicates the output format of the values (‘k’ = Kbits/sec).

On the image on the right, that is on the listening server, the result is very similar to the iPerf client, but shows, in addition, the indications on the average bandwidth values (bandwidth) in Mbits/sec for the packets sent and received.

In addition to this basic test just described, iPerf offers many other testing possibilities, accessible through the use of appropriate parameters to be sent to the executable.

Among all the most important parameters, there are the following:

Checking for the presence of connection problems and analyzing network performance for clients and servers is a very important operation when performing file transfer or online backup operations on Cloud, S3 or FTP (for example with Iperius Backup), to understand where there are any bottlenecks that worsen the quality of the transfer.

For downloading iPerf and iPerf3 for Windows and Linux and all other operating systems, we refer to this page of the official website: https://iperf.fr/iperf-download.php