With the latest releases of Iperius Backup ranging from 7.0 to 7.7.9, many new features have been introduced and various bugs have been fixed.

The main changes and fixes introduced up to version 7.7.9 are the following:

Iperius Backup is one of the best software for backup and replication of VMware ESXi and also ESXi Free virtual machines. It allows incremental and differential backup in thin provisioning mode, i.e. creating optimized backup files with only the used space on the virtual machine disks. You can keep any number of backups, and restore VMs to any given day or backup very easily. You can also restore single files.

Iperius is also the only software that supports the incremental replication of VMware virtual machines even on ESXi Free, and also directly from host to host, without the need for the vCenter (which is perfectly supported, as well as ESXi Cluster).

Finally, Iperius has a very high reliability and an extremely low cost. With a single license you can back up and replicate unlimited VMs that you can reach in your network. No hidden costs or additional costs per host or VM. To all this, you can also integrate backup to NAS or Amazon S3, Google Drive or other cloud or FTP spaces.

Click here to try or buy Iperius Backup for ESXi 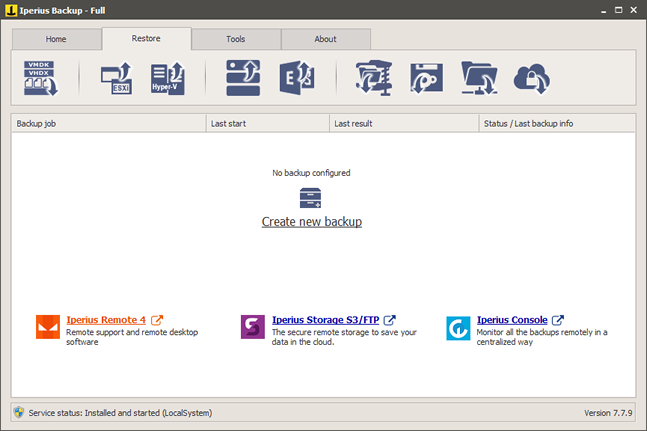 Below you can read a list some of the most important features that have been added since version 7.0:

Some other important features developed over the last 2 years:

Finally, some great features added to the Iperius Console: