Iperius Backup allows to create a system image backup for Windows. When you create a drive image, you can restore the whole computer in case of hardware failures, virus infections or system crashes.

If you want to see how to make a system image backup, read the related tutorial: How to make a Drive Image with Iperius.

This simple tutorial will show you how to restore your computer from a system image backup (bare-metal restore) starting from a disk image saved on a local/external disk or in a network share, and simply using the Windows installation disc or a recovery disc.

Restore can be made even to different hardware (Hardware Independent Restore).

If you don’t have the Windows installation disc, you can create a recovery disc following this simple tutorial (for Windows 7) provided by Microsoft:  http://windows.microsoft.com/it-it/windows7/create-a-system-repair-disc

This recovery procedure is available on Vista, Windows 7, Windows 8, Server 2008, Server 2012, Server 2016 and Windows 10. The Windows version in the installation disc must be the same of that one in the disk image (including 32 or 64 bit).

Moreover, the new target hard disk must have at least the same size of the original disk from which the image backup has been taken.

Here are the few simple steps to restore your computer:

First insert the Windows installation disc or the recovery disc and reboot your computer (configure your bios to boot from the optical drive): 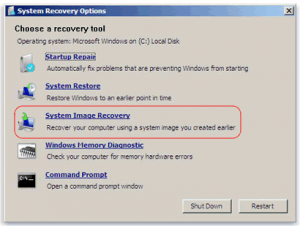 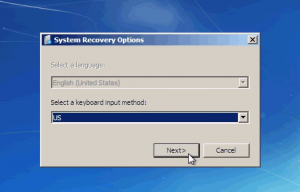 The recovery tool will initially search for existing Windows installations: 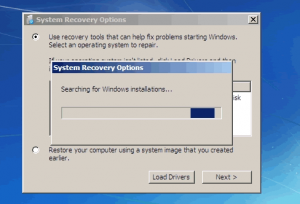 Select the option to restore a computer using a system image created earlier: 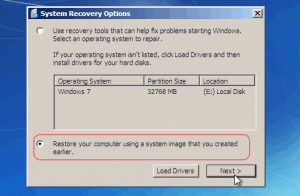 The recovery tool can detect image backups on the local drives, and automatically select the latest image created. However, you can manually select a specific image backup, selecting it from local drives or from a network path, as shown in the pictures below: 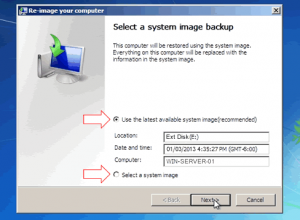 If you chose to select a specific system image, the recovery tool will show a list of available image backups. If instead you want to select an image backup on a network share, click on “Advanced”. 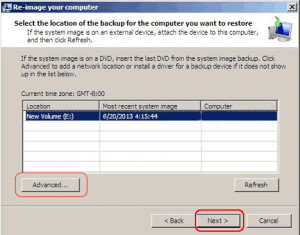 In the next window you can see some other specific options: if you’ve errors in the restore, this could be caused by a RAID array, so you can install the necessary drivers. The only requisite is that the target disk must be at least of the same size of the original disk from which the image backup has been taken, regardless of the image size. 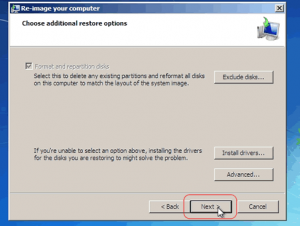 In the final window, the recovery tool will show a summary of selected options.

Click the button “Finish” to start writing the image backup to the new disk. 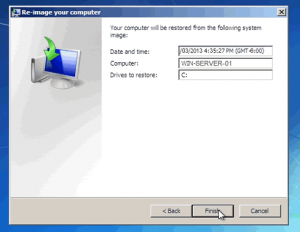 The recovery tool will ask you for a confirmation before proceeding with restore, because this operation will completely erase the target disk writing the image on it.

During the restore you will see the window shown in the picture below:

Once the restore is completed, the computer will be rebooted and you will have your system perfectly reinstalled just like when you made the drive image backup, with all original programs and settings.