Iperius is a powerful and complete backup software for Windows. Among its features, you have the full system image backup (Drive Image), that allows to backup and restore the entire system in a few clicks. The image backup is made automatically and without any service interruption or system reboot, therefore without interfering with the user work.

This backup type is very useful in case of system crashes, virus attacks or hardware failures because it allows not only to recover all of your files but also to be operational again in a few time. In fact, you don’t have to reinstall programs or reconfigure your work environment. Your system will be completely reinstalled and be working like before the disaster.

The restore can be made even on dissimilar hardware.

From the program main window, create a new backup job:

Click on the button circled by red in the picture below to configure the system image backup. You must specify the source drive, so that one you want to backup (generally C, the system disk) and the destination folder, that can be another disk drive or a shared folder in the network: 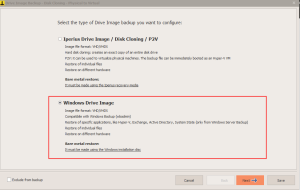 Looking at the picture below, we can choose to specify a network destination. For example, when the destination is a NAS, usually it is necessary to specify a user account of the NAS (username and password) to access the network. 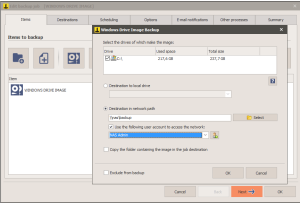 When you configure a system image, it’s not mandatory to add additional destinations to the backup job (panel “Destinations”), because a destination is already included in the item. However, you might want to copy the backup files to further destinations. In this case, the whole backup process will be completed in two steps: first Iperius will create the drive image in the item destination, then the image backup is copied to other destinations, such as LTO tape drives, other computers in the network, NAS devices, Amazon S3 etc. Finally, this option can also be used to keep multiple copies, simply adding a destination to the same folder in the “Destinations” panel and choosing the number of copies to keep.

N.B: In order to avoid keeping duplicated folders containing the same image backup (in fact, Windows creates each time a folder named with a timestamp), you have to enable Synchronization.

In the picture below, let’s see how to configure, as an example, Amazon S3 as a destination: 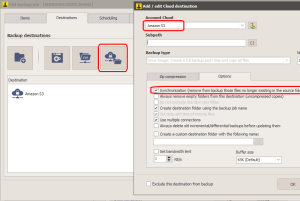 As you can easily see, when you add a further destination, the type of backup is set on “Create a full backup each time …” and cannot be modified. This because the image backup will always appear as a complete backup, consisting mainly of the image file of the disk, therefore, even its copy in a further destination must be a copy of the whole file.

In the next panels, you can configure scheduling and email notifications, to run the backup at specific days and times and to be always informed of the backup result and possible errors. You can also configure external processes to be run before and after the backup.

In the final panel, specify the backup job name and click OK to save it.

Once your new backup job is on the list, you can immediately run it by right click.

In the backup destination, Iperius will create a folder named WindowsImageBackup, where it will save the big image file that contains the whole system disk. During the restore process, it will be very easy to select that folder to write back the image file to a new disk.

Compared to the standard Windows Image Backup, Iperius adds many important features. You have a greater control on the backup process and its verification, you can copy it to multiple destinations (such as LTO tape drives), you can receive notifications by e-mail and configure a detailed scheduling. Therefore a better control, a better security, and a greater flexibility.

The recovery process for a system image backup is even more simple. In order to see how to do that, read this tutorial.

The system image backup is available starting from € 29 for workstations (Desktop edition) and from only € 69 for servers (Essential edition).