A common problem that one can encounter when installing Iperius Backup as a service and setting up a schedule for it is to encounter errors accessing network paths.

These errors generally occur only when the backup is run in the automatic mode according to a schedule, while backups run manually complete successfully.

The cause of this problem is very simple. When Iperius is installed as a Windows service and the default settings are left as they are, the service will be started using the local system account, or SYSTEM. In this case, scheduled backups, since they are run by the service, will also run using this user account, which generally does not have access to network paths, nor may it have the necessary privileges to access certain folders.

The authentication issue has an easy solution since Iperius allows one to install the service using a specific account and to impersonate a certain user account for backup operations. The difference between the two solutions is minimal (and the choice between the two is usually to be determined only in more specific situations), except for the fact that impersonating allows you to continue to see the AutoRun window of the backups in the primary session. If one installs the service with a specific account, the AutoRun backup window will not be visible as it is running in a session other than the primary one.

In the image below, we can see the choice of a specific account (we always recommend using an administrator account) for installing the service: 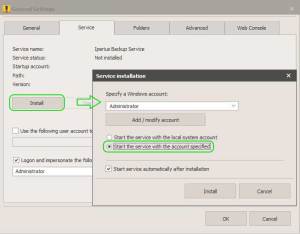 Of course one can change the logon account of the service directly from among the Windows services (the Iperius Backup service is called “Iperius Backup Service”).

In this second image, we can see the other mode, i.e. installing the service with the local system account and selection of an account that will be impersonated by the backup processes: 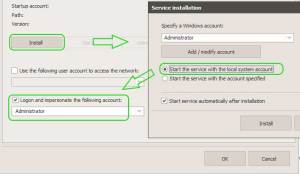 Finally, one may need to set up an additional account in order to access network paths, as, for example, in the case of a folder shared on a NAS drive and protected by a password. This account can be specified globally here in the service panel (it will be valid for all network paths), or else as a single destination, as shown in the figure below: 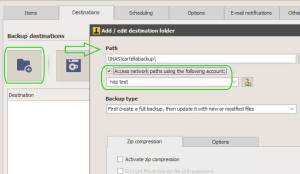 With these configurations, even scheduled backups can run without errors, just like those run manually, as the user they run under will be the same (or will have the same privileges) as the user under which the backups are run manually. For more information on installation as a service, see this tutorial.