Iperius is a complete and flexible backup software for Windows. It allows to make many backup types, using various backup modes: full, incremental and differential.

The incremental backup allows to optimize backup duration and performance. The first time Iperius copies all files, while the next times, it only copies new or changed files.

With Iperius you can create backup strategies to keep a complete history of file changes, creating each day a new backup and so a new version of files. In the Drive Image Backup, for example, it is performed a progressive update of the disk image file, thanks to the block-level mode, that copies in the backup file only the disk blocks that have been modified.

In all the file-by-file backup procedures (such as NAS backup or FTP backup) you can specify different backup types. Let’s see them below: 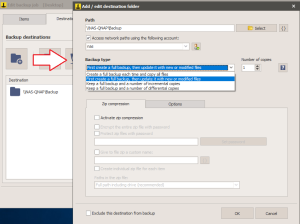 By default, in the local, network or FTP destinations, Iperius will use the incremental mode. The first backup will copy all files, while the next ones only new or changed files (overwriting old files in the destination). The final result of this backup type is always a full copy, that is updated at each new backup. This mode is the recommended one, because it increases performance, reducing disk writing operations and network bandwidth usage for remote backups.

You can also specify the number of copies to keep, to have the same full/incremental backup replicated more times, and overwritten in rotation.

The full backup doesn’t make any check on file existence or file date. With this mode, Iperius always copies all files, overwriting those existing in the destination. The time needed to complete the backup will be always the same, because all files are copied again every time. If you specify more then 1 copy, you will have multiple full backups. The full backup mode is generally not recommended, because it’s slower and requires more disk writing operations and network bandwidth.

This mode could be considered the more complex one, because it allows to create a granular backup strategy and to keep a complete history of file changes. Using this mode, Iperius will first create a full copy, then, in the next backups, it will create numbered folders only containing new or modified files since the last full or incremental backup.

In the destination folder you will have a folder structure like that shown in the picture below: 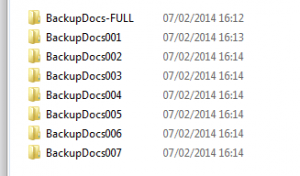 The folder with the “-FULL” suffix will always contain the full copy, while the numbered folders will contain only new or changed files since the previous backup. For example, in a weekly scheduled backup, the first full backup could be made on Monday, while the incremental ones on the next days. If a file is modified every day, you will have a copy of it in each numbered folder. This allows to keep a complete history of file changes, and to save space on disk. If you choose to keep only one incremental copy, this can be also considered a differential backup.

Even in this case, the destination folder will have the structure shown in the following figure:

The folder with the “-COMPLETE” suffix will always contain the complete copy, with all the files inside, while the numbered folders will contain only those files that are new or that have been modified since the COMPLETE backup. As part of a weekly schedule, the COMPLETE backup could be run on the first day, while the other backups would be done in the days that follow. The differential copies will always contain all the files that have been changed or added since the last COMPLETE backup was carried out.

This operation will be repeated for 7 days from the new backup cycle and is available for both compressed and uncompressed backups.

These backup types are available for all backups to local or external hard drives, to network folders or to FTP servers. For all these backups it can be also used the synchronization, to automatically remove old files from the destinations if they don’t exist anymore in the source folders.